San Diego, CA – The PBUS Mid-Year Meeting held at the Manchester Hyatt in San Diego July 8-11 was by far the best PBUS summer meeting I’ve attended in more than a decade.  The success of this meeting is a testament to the new administration and critical administrative changes made in the waning months of the last administration.

The coastal venue in Southern California was like an oasis.  The hotel, the setting next to the pier and the weather were all very welcoming.  The scheduled was not too crowded and the information offered was fresh. Both the cocktail party and dinner were first rate and while I did not attend, I understand the For Women’s Only Lunch was successful and everyone had a good time at Sea World on the final day of the conference.

I’m not alone in my opinion.  Several attendees remarked about how nice the event was this summer.  PBUS has been operating for just over thirty years so it was time for a house cleaning. Gone are the former executive director and staff.  Gone is the Washington D. C. office space.  Gone is the tremendous cost associated with both. Changes made at the end of Past President Linda Braswell’s administration have provided a friendly environment for new Executive Director Melanie Ledgerwood and current PBUS President Scott Hall who, as a member of the Board of Directors, enthusiastically argued the changes that have occurred.

Scott Hall reported at the Board of Directors meeting that PBUS, as a result of a reduction in overhead, was in good financial health.  The 2013 winter conference is set for a return to the Mirage Resort and Casino in Las Vegas.  I’m looking forward to seeing what PBUS has in store for us next February.  As for this meeting I give them two thumbs up.

Meeting Notes
Council of Presidents Meeting – Dave Hyatt from Colorado reminded everyone transfer bonds were no longer permitted in the Rocky Mountain State.  If you’re an out of state agent whose client has been arrested Colorado you will now need to refer your client to a Colorado bail agent.

Ralph Williams of Alabama reported a suit has been filed regarding the recently imposed $35 per bond fee.  The basis of the suit is the Alabama State Legislature is prohibited from passing revenue generating legislation within a certain period prior to the end of the legislative session.  Mr. Williams also clarified the surety bail agents must absorb the cost of the $35 fee while professionally licensed bondsmen can pass the fee onto their clients. 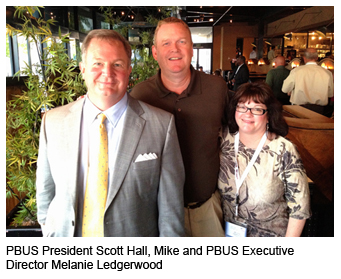